Writing As Catharsis: Isn’t That How Most of Us Became Writers?

Shit is going down in The Circus Big Top.

I’m recovering from pneumonia. Basically, the entire big top is in rapid free fall to Hell in a handbasket.

Son 2 officially announced what I have been dreading for a while now; he’s moving to Oklahoma with the Girl in a few months.

My grandmother is fading, and I spend part of my mornings texting and emailing family members to keep up with her status as she is in L.A.

I hear through the coconut telegraph my estranged mother is also fading.

I deal with this the way most writers do. I write.

Pneumonia sucks. And the recovery? Sucks even more!

I’m conflicted about all of these things. I hate being exhausted and having joint pain. Most days I need a nap by noon, and I haven’t had a glass of wine in WEEKS because of piles of medications. It also means I’m not in the best shape to deal with all of these fires.

Don’t get me started on why I have zero desire for my children to move out. Yes, I want a commune. I have a magazine article out on submission on the topic. If it gets published, I’ll let you know.

My grandmother is almost 96 years old. It’s sad, but it’s not surprising. 96 is a long life. I spent some time with her and the Dotter in April. We hung out, ate cheeseburgers, and kicked ass at Wheel of Fortune. Good times.

My family is a convoluted mess. To be fair, my grandparents started it, so even my grandmother’s situation has been complicated. And that brings me to my mother. I’ve poked at her in my posts because the humor was a way of dealing with her multiplicity.

The post I wrote about her dementia was hard to write because she was hard to quantify. At my parents’ request, I haven’t contacted them in three years.

This news of her downturn doesn’t surprise me. The Beard and I had a three-year plan worked out when we were moving my folks in with us. We would take on 80% of a mortgage on a larger place to accommodate an independent space for them to live and alleviate their financial expenditures so there would be a budget for the long-term care of my mother.

I already had appointments set up to have my mother screened for dementia. An MCI screening with a new doctor, blood tests, a rigorous review of her medications, all things to help narrow some treatment schedule to figure out the best course of treatment. We’d be on location to help my dad if he needed it and he wouldn’t be alone in the case of her passing.

And then I wrote about the dilemma of taking care of parents with dementia when your relationship with them was challenging. I wrote about the conflict, disappointment, love, and yes, the truth. I’m a writer. It’s how I process things. The truth can be a killer.

Survivors of incest and abuse can tell you the truth is a hard-won prize and we cling to it with fierce tenacity.

For me, the post helped to burgeon my empathy and anchored the principles behind my decision to help them. For them, sent by an indignant family member (my parents have never read anything I’ve published), it was ugly, insulting, and probably worst of all, public. Some of the family labeled me as Devil’s Spawn, liar, delusional, uncouth, trashy, and evil.

And most simple of all, neither one of my parents wanted to accept the reality that my mother might have some type of early onset dementia. 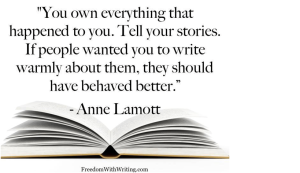 In response to the situation, my mother said, “I hope you die and rot in Hell.”

That statement encapsulated my entire relationship with my parents. As a parent of three fantastic offspring, who were also ridiculously challenging in their own ways, nothing . . . NOTHING in the expanding universe would ever induce me with the thought or the words, “I hope you die.”

When my parents said they’d never speak to me again, my mother’s statement allowed me to walk away absolved.

In three years, I haven’t felt any guilt or shame about my writing or my truth. They’re my parents. I still love them. I’ve worried. I’ve had concerns. My father is getting older. I knew from family my mother was deteriorating. At my grandmother’s behest, I tried to contact my father. No joy. At my aunt’s request, I decided to contact my father. No joy.

My half-sister, my father’s daughter, called me to tell me things with my mother had grown worse. In light of the possible severity of my mother’s health, I called my father. He hung up on me.

I’ve been talking to The Beard, the dogs, and myself. I’ve told the offspring I love them and even LIKE them twenty times in the last three days. I thought I’d call my father again and wrote bullet points to keep track of my topics. Bullet points turned into a draft of a letter. I reworked the draft, so it was tighter, on point, and less wordy.

Writing the letter, working the draft, the process of it clarified my struggle of the last few weeks. It sort of morphed into this post. I’m a writer. It’s how we get through the fog of life to the clarity. Or some approximation of clarity.

Have I mentioned I haven’t been drinking? Soon. Very soon.