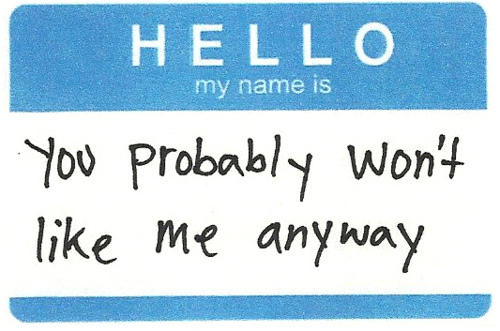 I’ve been mulling over this post for a couple of weeks. It’s presented me with a struggle. Last night with friends helped crystallize my thoughts or maybe it was the beer. The conversation went like this…

C: I told my mom we were coming over for dinner and she didn’t remember you.

Me: Tell her I was the woman at the baby shower not wearing a name tag. She sat next to me. She noticed and insisted on making one for me. I left five minutes later.

My friend Sarah, C’s wife and my long time friend, burst out laughing at the idea of me wearing a name tag.

I’ll chat happily with the grocery clerk, the butcher at Whole Foods and most any other folks I meet. That’s easy. It’s the general niceties of society for which I have zero patience. Baby showers, chit chat at weddings, staff meetings….shoot me.

I’m not a rude person, but I am direct and to the point. I’ve found a lot of people don’t like it. If you’d like a straightforward, call it as I see it opinion, I’ll give it to you. I’m not out to hurt you, I’m offering my perspective. This whole, “Hi, how are you?” “Oh, I’m fine,” thing drives me mad. Nine times out of ten, a person isn’t fine and the energy to put on that face is a waste. Just call me Darcy.

Add to this undeniable flaw, I’m sarcastic. Yeah, I know, hard to believe. As I said, I’m a terrible person. At least, you know where you stand with me. I don’t pretend to be any other way, but I find people project their expectations onto me. My refusal to cave has cost me friends in both benign and important moments.

My experience is many people don’t like the truth. They would like some brand of “let me blow smoke up your skirt and then tell you in the gentlest way possible, so gentle you probably won’t even hear the critique” truth. I’ve been this way a long time.

Living with a mother who revised events from yesterday, let alone history demands a firm grip on reality. I paid a high price for giving up that hold. No more.

High school was rough because I didn’t stick with one group. I liked the diversity of my friends. Some were stoners, some were jocks, some were gamers, some were theater folk. Life is wide and I enjoy roaming.

A boy’s jealous girlfriend painted BITCH on my truck. He and his friends laughed. I punched him. A devout, Christian teaching colleague accused me of lacking loyalty to the school at a staff meeting. I informed him the Beard and I purchased three class sets of novels out of our pockets in order to align our novels to the new curriculum. We didn’t need acknowledgment. Shut him down pretty quick.

I don’t need other people to know who I am. I know. I’m a hard person. I accept it. I don’t have many friends, but the friends I have know me and accept me. I rarely worry if people like what I have to say. I’m not wielding my perspective as a weapon, I’m offering some concrete, don’t be disappointed advice. Okay, it might feel like an assault some days.

The teenagers complain I’m scary and their friends are intimidated by me. Good. If you can look me in the eye all the better. Okay, I did chase some teenagers out of the house with crutches, but I had good reason and they had been warned. Of course, the sons irritate me to no end, currently hardwired to deny the truth on principle.

I’m concerned this isn’t the greatest character trait for an author selling books.

Contradiction time. I’m a writer. I ask questions. I’m interested in how people arrived where they are and what decisions they made. I made The Beard’s mother cry the first time I met her because I asked questions that she, as a straightforward woman, answered honestly. I desire the truth. I offer it and prefer it from people. I have great conversations with total strangers. I know, it’s weird.

As a storyteller, I love fiction. Embellishment….you bet. The Beard often takes umbrage at my clever additions to liven up a story. I enjoy playing to the audience. It’s the important things on which I’m a stickler.

Walk the Talk. The difficulty in this practice is our fear of exposure. The revealing of our true nature terrifies most people. We live in a society built on the appearance of integrity. Wow, this post went heavy….gotta shift it up.

I’ll weave you a story. I’ll invite you to explore the worlds in my imagination. Sorry, there’ll be no smoke blowing.