Finding The Symmetry in A Marriage of Opposites 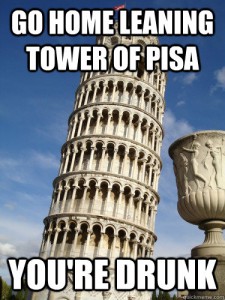 Once upon a time, long long ago, The Beard and I commingled households. I cleaned out his bachelor cupboards. He started finishing the basement so the offspring would have bedrooms. That was almost thirteen years ago.

I may have mentioned the Beard is an engineer and computer wizard. If you know any engineers, you know what I’m talking about.

In the early days of the kitchen, our fundamental differences became apparent. I like asymmetry and he’s a symmetry fan. Our weapon of choice in this war was our kitchen table. In its original position pre-kitchen remodel, I liked it cocked at an angle and he preferred it parallel to the wall. It became a game. In the morning, I’d move it out and by the evening he’d move it back.

The battle ended in stalemate after we knocked a wall out and moved the table to the middle of the room where, of course, it needed to sit square.

This quirky contrast emerged in other areas of our relationship. Anyone who knows the Beard would label him as the square peg. I find it hilarious.

This is a man who can’t watch Hawaii Five-0 with me because the techno babble infuriates his computer expertise. My laissez-faire approach to hanging pictures causes him apoplexy. He hates the way I fold his handkerchieves but keeps silent in deference to the fact he rarely does laundry.

There were hints of a recessive aberrant trait. He doesn’t make the bed, which drives me mad as he’s typically the last one out of it. He loads the dishwasher willy nilly without concern for water flow and rattling. He’s also a piler. Next to his side of the bed rests an antique piano stool stacked waist-high with clothes in various stages of dirty.

Over the last couple of months, as we engaged in a search for a new hostel I discovered a new and conflicting aspect to his aesthetic. For all of his leveling, measuring, and precision, the Beard in search of a new home was looking for something unique. But to go so far as to look for off-kilter architecture in a house?! This deviation from his norm cropped up when I mentioned disliking a house because the rooms were asymmetrical with curved walls. He scoffed.

“You love asymmetry,” he pointed out.

“No good way to place the furniture,” I said.

“Asymmetrically, I suppose.” He snorted.

The Beard loved the odd placement of the rooms. He was searching for interesting architecture, distinctive rooms, or some variance from standard.

Recovering from our near-miss house purchase, we’ve redirected that energy into the final phase of our house remodel. A project we began six or seven years ago with my innocent question, “Can we move the dishwasher from the right of the sink to the left?”

We’re back to the symmetry war. The new counter tops have been installed. Hallelujah! After four years of white melamine, I’m perplexed at this new addition. New counters mean finishing the backsplash.

After much discussion with our friends, I’ve decided to add the last splash of color by using glass mosaic tiles between the quartzite counters and the white glass subway tile. The mosaic tiles already frame my atrium window so the colorful border will tie in nicely. The only question left is symmetry or asymmetry.

You know which side the Beard came down on.