Oh Holy Coffee Angel Who Has Descended Upon This Coffee Barren Land!

I actually said that to the poor girl in the espresso hut that miraculously appeared next to the gas station in Burns, Oregon. Oh, I’ve been making my lovely espresso in the art piece that is the Bialetti. It’s delicious. It’s caffeine. It’s just not quite my steamed milk espresso….sigh. The dearth of coffee available on this trip has surprised me. Okay, after seeing the middle of Idaho…it doesn’t surprise me. To suddenly come upon the little coffee hut in Burns felt astounding. If that isn’t enough miracle for you, they had my Precious Divinity Chai. I’m not making that up. My all time favorite chai is Precious Divinity and the tiny coffee hut in Burns had it! Cue Charlton Heston music. I ordered a Dirty Chai….a chai latte with a double shot of espresso. All was right with the world….Ommmmmmm!

Sorry, I was so excited about coffee, I jumped ahead of myself. After a little soak in the hot springs, we struck camp and headed out to Burns. Did you know in Oregon you cannot pump your own gas? Way back in the day, when I was a teenager there was one full service station in Englewood. In the winter, I would suck up the extra four cents a gallon to have someone else pump the gas. I’ve never seen one since then….now I have. Since our supplies were limited by the scarcity of grocery stores, we asked the gas guys where in town was the eats. These guys knew food, if you know what I mean. They both replied in unison…RJ’s.  RJ’s is an old time, honk your horn and order, drive up. We went in and I was tempted by the patty melt, but ended up with breakfast potatoes and eggs….my paleo has hit a few speed bumps out here on the road. The dotter and the niece had the salad bar and frings….I know, right?

We strolled out very full and ready for the drive. We followed Scenic Byway 20 through the Willamette National forest…I already posted on what that was like. A five hour drive was perfect….note to self! River Bend Campground sits right on the Willamette river….i’ll just say it right now. We’re ghetto. Or as the dotter calls it….we’re janky. Here is our rig and here’s the forest of rigs in which we are planted. Most of these have flat screens on the sides under the awnings…flat screens. To say we’re a little outclassed is an UNDERSTATEMENT….buy my books!

Are you kidding me? Nothing like slumming it….of course, I’ll have to get used to this because the campground I’m staying at in Long Beach is about on par with this crowd. Up to this point, we’ve been on par with our fellow campers. Ouch. Great news is that I met a couple of campers across the way….Warren and Karen Johnson. These folks are traveling with their agility dog….now her name escapes me. Karen is a big reader and Warren was interested in the book, but accepted the free download of the ebook instead. Seriously, he wants the paperback. 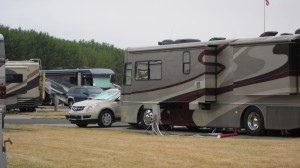 I’ll say this and then leave it for part three…..one of the joys of this tour has been meeting people like the Johnsons. Everywhere we’ve stayed, there’ve been folks interested in the book, where we’ve been and where we’re going. They’ve offered a bit of their stories when asked…I always ask because their stories fascinate me. From Barb, who has always wanted to write a book to Jason, who works as a post manager so he can gather mushrooms and hike around the countryside all of these people….full people as the dotter very wonderfully put it, have been kind, curious and generous.

I’ve developed three characters for the next two Esau books based on some of these stories. I’ve been inspired by the conversations we’ve enjoyed. I’ve been graced by the variety of knowledge these people have shared. I’ve discussed drought, agriculture, medicinal fungi, stem cell research, cloning, tattoos and dog agility trials. That’s just the surface. My mind is agog with the infinite diversity of humanity. There were several “There are crazies out there.” Certainly the drivers in Idaho fit that category….sorry Idaho, but despite political views, cultural focus and spiritual beliefs….I do think that for the most part, we have more in common than not.

Let’s get over our fear and need to force others to conform to our way and embrace all that we are because it’s damn interesting!

Enough proselytizing….we’re heading towards Eugene, where I believe there’s an independent book store to drop in to visit and thanks to Warren….we know there’s a Voodoo Donuts. Son 2 and I have seen these donuts in movies and on a couple of our shows. Reading the menu made my stomach a bit upset, but we’ll see. We’ll move on down the coast into California where we’ll stay in Trinidad smack dab in the middle of the Redwoods. I’m hoping some long walks will occur as the dogs are getting comfortable with our routine and need some exercise. Okay….it’s starting to drizzle and there’s a baby eagle hovering over my back disappointed that the dogs are so big.

Signing off….read the book, leave a review, shoot me a message!