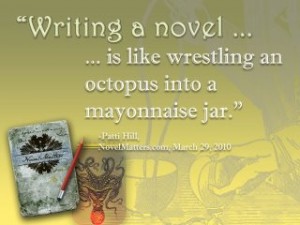 Writing a novel is like giving birth. I’ve heard this comparison several times. It irks me. The recently finished Esau Convergence left me beat. I looked forward to the celebration of completing my second novel to find only crickets.

The Beard is neck deep in his own code writing block. Son 1 was lukewarm at best. It was anticlimactic. I longed for dinner out perhaps popping a bottle of sparkling wine. Something. Some acknowledgment of the feat completing a second novel is.

I tweeted I had postpartum book depression. I knew choosing the description might elicit labor comparisons. Yes, writing a book is a torturous act of love. Yes, it’s creation of something from nothing. Yes, it can be a long, drawn out process full of stops and starts. I see how writers make the connection.

In my opinion, it’s flawed. I’ve had three babies all natural deliveries including two back labors. I’m not one of those ‘four hour’ labor women. Good for you if your delivery was twelve hours or less! Seriously, celebrate. I started with thirty hours and moved up to thirty-four by the third.

I love my children fiercely. It’s kind of a crazy love, okay, not kind of. For the majority of their lives, I raised them alone. The Beard came along, he likes to say he parachuted in and volunteered for this circus. 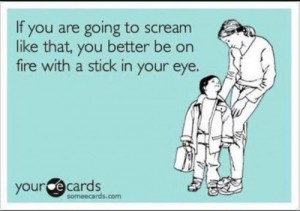 My children, respectively twenty-two, nineteen and eighteen, are incredibly intelligent, gorgeous to look at, and some of the most infuriating people on the planet. I’ll admit that last one is probably true only for me unless you’ve met Son 1. He’s definitely infuriating.

Here’s how I describe them. Dotter is Bodhisattva like in her kindness and empathy with a Dali-esque imagination and talent. Son 1 is Moriarty clever. Son 2 is Einstein brilliant with a dash of Elmo thrown in. They are all fortunate I remember how much I love them because they’ve been close to infanticide on more than one occasion.

They should also thank The Beard. He frequently reminds me I would deeply regret their passing later.

No matter how often I work at giving them ownership of their suffering a part of me is wrenched each time they stumble. I resist offering advice with the understanding they will do the exact opposite of what I say. I think it’s hardwired into their circuitry. 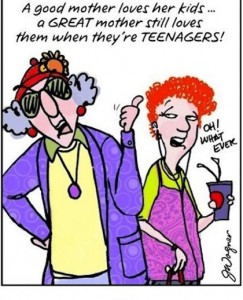 mother with truly gifted children and they still f%$# up on a regular basis. They lie to your face even if it’s not important. They seem determined to do the most infuriating things. They trample you like dust most days.

I hear they’ll become human again in a few years. I’ve stocked up on wine until then.

Novels are much less strife. You write them. Characters can give you fits especially when they don’t behave the way you planned. You have to edit novels, but they don’t talk back. I’ve suffered a few negative reviews but most books I read have a few.

Once a novel is done and out in the world, it’s done. I love my books and they excite me but they’re not my kids.

Thank goodness because if writing a novel was really like having kids, I’d never write another word.