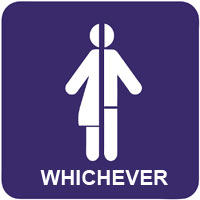 Studying literature for my masters meant tackling Foucault. For those of you not in the know or who are a bit rusty, the boiled down version of his theory is that language is a construct. We make up its meaning and often figures in authority or in the majority use those artificial constructs to express and maintain their dominance.

Whew! Even boiled down, it’s complicated. A table is an object to set things on, but we named it table. The word for a table doesn’t imbue the object with its purpose. The object imbues the word with meaning. Maybe I’ll give up because that doesn’t feel less complex either.

With marriage equality, transgender equality, and gender equality hot in the news recently, I’ve noticed a lot of chit chat about gender neutral pronouns. I’ve found this to be a common older generation issue. As a teacher, I used to rail against those pesky, ambiguous pronouns in writing but now I don’t see the validity of the argument against them.

I don’t typically use them as a writer though I notice they pepper conversations around me. Yes, I’m the creeper eavesdropping on your too loud discussion at the coffee shop. Both of my young adult boys regularly use gender neutral pronouns in conversation. Also, they frequently refer to me as Dude until they notice the murderous look on my face.

In a conversation about the most recent date, Son 2, who, if I must label, is bi-curious. We say he’s distracted by shiny objects. It’s no never mind to us who he is dating as long as they are kind, gracious and not afraid to show their face in our home. I’m an equal opportunity menace. Cross my boy and I’ll cut you.

To set the stage, the last two love interests happen to be male. Recently, he regaled me with news of a new person. The entire conversation took place in gender neutral terms. In the back of my head, I desperately desired to clarify girl or boy but I resisted. Finally he dropped a name….a gender neutral name. F*&^! I thought I’d have to ask but at last he used a feminine pronoun! I dodged the ‘I’m an old fogey’ bullet. 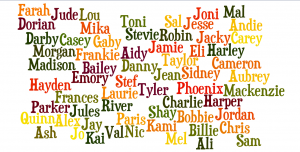 A couple of days later, both boys joined me for breakfast. A rarity these days but it lead to a second conversation about “Misha”. Once again, the conversation contained nothing but gender neutral pronouns and the addition of the neutral “Misha”. I could see Son 1 arriving at the same place I had the first time round. He didn’t hesitate. “Bro, are we talking boy or girl here?”

There was zero judgment. No sarcasm. No older brother harassment. Just total confusion and honest curiosity. Son 2 answered without umbrage and the discussion moved on without incident. I know many of you are cringing right about now but in our house this ain’t no big deal. We’ve had bigger and more critical fish to fry in the last several years.

I’m not sure I’ll get past using gender-specific pronouns in my writing. I like the clarity, but I’m sure a generation of young writers are blossoming out there with stories about their lives and their world. 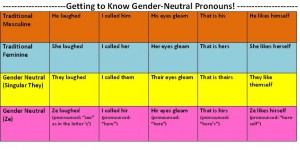 I think us old codgers need to rethink our attachment to roles and language that no longer serve us so well.